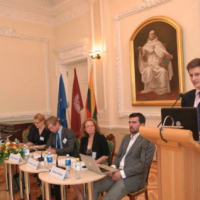 On 7-10 August the 14th World Lithuanian Symposium is taking place in Vilnius. The event is organized by the Lithuanian World Community (LWC), which is a non-profit and non-governmental organization that unifies Lithuanian communities all over the world.

More than 190 Lithuanians including LWC executives, representatives of local communities and youth organizations and politicians come together to discuss the relations between Lithuania and Lithuanian emigrants as well as the questions of emigration, dual-citizenship and the future of the LWC.

Regina Narusiene, board chairman of the Lithuanian World Community, hopes that the next parliament would revise the Citizenship Law and allow dual citizenship.

“Of course, this (legalization of dual citizenship) will happen. The question is whether there is enough political will for this. This parliament did not have it, this doesn’t mean the next parliament won’t have,” Narusiene told journalists on 7 August, BNS reported.

She indicated that dual citizenship could be allowed by law, without the need to revise the Constitution. “The Citizenship Law that has been adopted is just the first step forward. (…) Changes and improvements are possible to the Citizenship Law, however, we must admit the natural right of a person of Lithuanian origin to keep his Lithuanian citizenship,” she said to reporters.

During the opening ceremony, the Speaker of the Seimas Irena Degutienė emphasized both the importance of such organization as the LWC and the need of unity and cooperation between Lithuanians living in their own country and abroad.

The World Lithuanian Symposium takes place once in three years and is the most important event for the LWC.