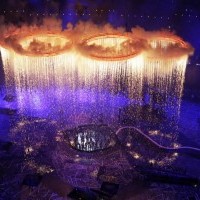 Two-time Olympic champion Virgilijus Alekna should boisterously bid farewell to the great sport at the London Olympics. Nearly two-thirds of the Lithuanian population believes the biggest hope for the forthcoming Olympic Games are linked to the 40-year-old discus thrower. According to the DELFI commissioned “Spinter research” survey, the majority of Lithuanians expects a total of 1-3 Olympic medals, Delfi.lt reported on 23 July.

V. Alekna is glad to be one expected to get an award.

Fifty-three percent of respondents believe that Lithuanian athletes at the London Games will bring back one to three medals. 11.6 percent of the population believes the country’s Olympic haul in Great Britain will be 4-6 medals; 5 percent are even more optimistic.

However, nearly 13 percent of respondents – skeptics, have doubts that even one Lithuanian will lift a foot onto an Olympic podium.

According to the survey, the most optimistic, expecting 4 or more medals, are 18-35 year olds, those with higher education, and highest-income city residents.

How many medals will Lithuanian athletes earn at the Olympic Games in London?1-3 52.9 %


V.Alekna followed by basketball team and a cyclist

Which Lithuanian athletes appear to be realistic contenders for Olympic medals in London? Sixty-two percent of the respondents had highest hopes for V. Alekna, then with 37 percent each – the country’s men’s basketball team and cyclist Simona Krupeckaite, followed by sailor Gintare Scheidt, pentathlete Laura Asadauskaitė, rower Mindaugas Griškonis.

More women believe in the basketball team, while men are more in favor of Alekna’s chances. Older people chose the track and field athletes, while the young (under 25) mostly named S. Krupeckaitę and M. Griškonis.

Assessing the prospects for the basketball team, 28 percent of those polled believe coach Kestutis Kemzura’s team draws a trip to the semi-finals, 19 percent of the respondents see the Lithuanian basketball players making the Olympic final. Meanwhile, a quarter of the population believes that the Lithuanians will not battle for a basketball tournament medal.

With which athletes do you have the highest expectations at the Olympic Games in London? (percent)

With discus thrower Virgilijus Alekna 62.1 %
With the basketball team 37.8
With cyclist Simona Krupeckaite 37.5
With sailor Gintare Scheidt 21.4
With pentathlete Laura Asadauskaite 19.7
With rower Mindaugas Griškonis 15.9
I am not interested in the Olympic games 12.0
Do not know/did not answer 5.6
Total: 100