Evolution and prospects of Lithuania-Poland relations 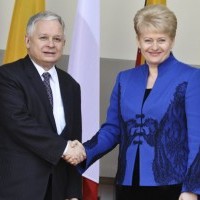 At the conference “Lithuanian-Polish relations: diagnosis and key challenges” in the University of Warsaw on July 9, Lithuanian Vice-Minister of Foreign Affairs Egidijus Meilūnas discussed relations between Lithuania and Poland in the past, present and future, and their impact on the countries’ efforts to fulfil their EU and NATO targets.

Participants of the conference agreed that despite the public opinion, relations between Lithuania and Poland were good and productive in many ways. It was decided that a permanent discussion was necessary and must be based not on preconceptions and historical wounds, but on an open dialogue and healthy pragmatism.

Dean of the Faculty of Journalism and Political Sciences Janusz Adamowski opened the conference at the University of Warsaw. He called on the participants of the discussion to find the common denominator and to listen to each other.

Lithuanian Ambassador to Poland Loreta Zakarevičienė said that recently Lithuanian-Polish relations received a lot of attention while media was assessing them, but the assessments clearly had little to do with the everyday reality.

“Relations between the two countries are versatile and we enjoy strong people-to-people contacts. Yesterday I saw it best during the solemn commemoration of the death anniversary of aviators Steponas Darius and Stasys Girėnas in the Pszczelnik forest near the town of Myślibórz,” Zakarevičienė said.

Adam Michnik, Editor-in-Chief of the Polish daily Gazeta Wyborcza, stressed that reasons for disagreements between Lithuania and Poland were so insignificant and trivial that later historians would not be able to understand them. According to him, it is necessary to settle these disagreements and continue to develop friendly relations and partnership.

The conference was attended by Lithuanian and Polish journalists, independent experts, representatives of state institutions and non-governmental organizations.