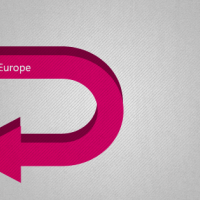 German Ambassador to Lithuania, Matthias Mulmenstadt is a great supporter of the European project and does not see any reason for people to fear a “two-speed” Europe. His country has always advocated closer EU integration.

From his perspective, besides emphasising the excellent diplomatic relations existing between Lithuania and Germany, he pointed out that German Chancellor Angela Merkel expressed to the European Parliament recently that “a renewed economic and monetary union would be open for non-euro states,” whilst a “deepened EMU will not lead a two-speed Europe, but a union of double strength”.

Furthermore, he said that the banking system in Europe is being developed in an effort to allow trouble banks to absorb money directly from the European rescue funds designed for such a task. In his own words, “we think that non-members of the eurozone shall participate in the negotiations on the banking oversight and participating non-euro countries should have real voting rights. We want to establish an effective supervisory mechanism involving the European Central Bank (ECB) for the banks in the eurozone and in those member states that wish to join,” Ambassador Mulmenstadt said.

15min.lt reported referring to BNS that the Ambassador also praised Lithuania’s fiscal consolidation measures, adding that “I think we see eye-to-eye on fiscal policy” whilst highlighting that “we need to strengthen economic coordination within the Euro area with binding commitments. We want binding rules to ensure that national budgets are in conformity with European rules,” Ambassador Mulmenstadt said. Seeking to dispel fears about national parliament’s alleged erosion of rights, he also said that “national parliaments will not lose a single right but we get a more efficient control by EU institutions. Thus we all gain more security and stability,” remarked the German diplomat.

Regarding the so-called Cohesion Funds and future EU budget, the Ambassador revealed that “our position is, and we are strict on this point: 1% of the GDP of the European countries must be sufficient. In all of Europe, national budgets are cut, consolidation and austerity dominate headlines. In such times, we simply cannot imagine that the European budget could grow,” explained the Ambassador.

Regarding the proposed cuts made recently by the European Commission and how it will affect the amount of funds that Lithuania will receive for the Ignalina’s decommissioning process, Ambassador Mulmenstadt said that “we understand that there are very difficult problems at this moment. But given the experience of the past, we think that we can overcome difficulties in a joint-effort and find a compromise,” concluded the Ambassador.