Grybauskaite warming up to the populace 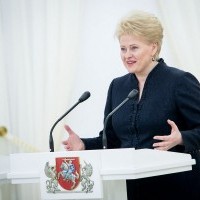 On delivering her annual report on June 7, Lithuanian President Dalia Grybauskaite, unlike previous occasions, has tried to identify herself with the nation, reports ELTA. Her main message was the necessity to continue the already-begun work on the changes in the government, says communications’ science expert Dr. Andrius Suminas from Vilnius University.

“What caught my eye, first of all, was that in this year’s speech there was more use of ‘we.’ The president used the pronouns ‘we’ and ‘I’ throughout her address; they served to stress her promises to fight the monopolies, and so on. This year’s speech is very different from last year’s national address,” Suminas said.

The expert said that the president most probably decided to use the plural, seeking to identify herself more with the nation now that her ratings are falling. The annual report targeted society, politicians and media. The stance of Grybauskaite was a standard one, according to him. But this year, unlike in the previous year, she avoided pointing to specific institutions. Instead, she expressed her support and gratitude to the Andrius Kubilius-led government. This is a very important sign for Kubilius as the parliament elections are approaching,” said the expert.
He also said he was surprised at how short the president’s speech was. “It is getting shorter and shorter with every year. This year the speech lasted for 26 minutes;

last year it was a bit more than half an hour, so the trend to shorten speeches remains. Who knows, perhaps we will have a 15 minute annual address next year,” the communications’ expert said.
In foreign countries, presidential speeches are usually lengthier and more detailed. Grybauskaite’s predecessor, former president Valdas Adamkus, would normally give extensive speeches as well.