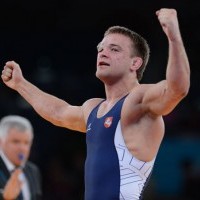 A Lithuanian Greek-Roman wrestler Aleksandras Kazakevičius claimed an Olympic bronze medal on Sunday’s night. The 26-year-old was awarded after his respective win (3:0) over Denmark’s Mark Overgaard Madsen in the 74kg division. A par terre defence took the first period for the Lithuanian with a gut wrench in the second on his way to victory.

The Speaker of the Seimas Irena Degutienė congratulated the Lithuanian wrestler: ‘Your achievement undoubtedly will become an inspiration for other Lithuanian athletes to reach for the best results’.

The PM Andrius Kubilius has also expressed his joy: ‘Your name written in the history of the Olympics shows your determination and will. I am happy with the whole of Lithuania and wish you great victories and new achievements in the future’.

It is the second medal at the London 2012 Olympics awarded to the Lithuanian athletes.