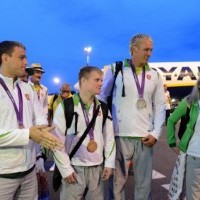 The record after the defeat by the Russian basketball team said it – maybe it’s the last record. However, a new Olympic victory brightened my mood. This Olympics has been the most successful since the restoration of Lithuanian independence. I’m glad that I was an Olympic attaché. Many have worked with the basketball team because I was its leader. The players didn’t shine this time. But other sports’ successes will allow us to forget the basketball team’s failures…

The other Olympic athletes have saved us all, with something in common of all sports – honor. Especially these “last-minute travelers,” like me, showing that Lithuania has more than just one sport. I worked with all my heart, because I wanted to contribute to the prosperity of the Lithuanian sports. I did everything I could. This is probably not much compared to doing some other work, but still, it is fun for me personally that our Olympians have achieved so much.

I think the success can be attributed in great part to the Lithuanian National Olympic Committee, which has operated for a number of years without assistance, with not one litas from the state budget. This indicates that we have chosen the appropriate model. As far as I know, our country’s sports budget is much smaller than in Latvia’s. Therefore, the results achieved by our athletes in London are fantastic. We have not only won more medals than the Latvians and Estonians combined; right behind Lithuania’s back were strong countries like Norway, Canada, Sweden, and many others. According to the number of medals per capita, we are in the top ten! Furthermore, we have an Olympic basketball team. And sending a team to the Olympic Games is great honor for any country.

Lithuania’s Olympic achievements this year were huge. We are strong in sports, and it has spread throughout the entire nation. Kids sports are a great way to find meaning in life, achieve something, be included, and to not be left astray. One child may then go on to seek medals and glorify Lithuania; the others will live a healthy life. The country’s athletes need to be proud, especially because winning promotes civic pride in their country, confidence, and a desire to achieve what may seem impossible today. To achieve something so that Lithuania is be prosperous; that it would be good life for all. Everyone knows what to do. From the bottom to the top; businessmen, civil servants, politicians, and professionals. Now there is a good chance to get that started. We only need to create a long-term plan.

This Olympics has shown that to be Lithuanian, one does not necessarily need to have a Lithuanian family name. Ruth Meilutytės coach is an Englishman; the wrestler Alexander Kazakevičius, rower Jevgenijus Šuklinas, and the entire boxing team and coaches have Russian blood. We must be tolerant and to unite all of our country’s citizens as patriots. We should be proud, and remember that together we are stronger. Every athlete and coach who struggles for Lithuania’s honor is more real than those Lithuanians who do not have a drop of foreign blood but do nothing to make Lithuania a little better. We need to connect, no matter who, where, or what we are – Russian, Polish, or Lithuanian. Fighting the fight for Lithuania, proudly, to accept everyone in our Olympic family.

Before, we had only basketball and Virgilijus Alekna, in whom we could rely on, because we knew they could cope. There may be a few other athletes who have carried our flag high in the world of sports. People knew very few sports stars. Now we have many athletes we can count on: Rūta Meilutytė, Laura Asadauskaitė, Jevgenijus Šuklinas, the boxers, wrestlers, and cyclists. We are especially happy that we can be proud of the impressive performances in many sports, rather than just one or two. We are have the same number of gold medals as Belarus, a country where the president tells you to win at any cost, and the state reserves unimaginable amount of money for sports.

Our athletes are also awarded very substantial prizes. The athletes will evaluate them, since if life does not change substantially, at least it will be enlightened. We need to thank the Physical Culture and Sports Department, which was able to return the prize for athletes to a pre-crisis level.

Thank you to the Lithuanian Olympic Sports Center, where perfect conditions allow the wrestlers and boxers to live and train; they do not need to look for happiness abroad. This shows that through sport it is possible to keep people in Lithuania.

I was very inspired by the fact that I could be with the Olympians. Of course the basketball players performance in London and last year’s European Championship was sad, but it has highlighted the need to focus on other sports, so that when the basketball team does not succeed, they may save our country’s pride.

We need strong people to stand behind our athletes. Maybe the situation is not ideal, but if we all work together to build sports halls, swimming pools, and stadiums, we can achieve even more. And these results will inspire the nation to believe that Lithuanians might be the best in their field – whether they are waiters or garbage collectors, or farmers, or artists, or scientists, or doctors, or officials.