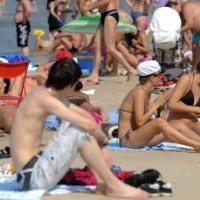 As a result of the climate change, the British Iles and the Baltics could become one of the most popular tourist destinations in Europe, Head of Latvian Environment, Geology and Meteorology Forecasting Centre Andris Viksna said in an interview to Lietišķā Diena (Business Day), Baltic News Network (BNN) reported on 1 August.

‘First of all it should be admitted that climate is actually changing. I’m not saying that there is currently a notable warm up. I’m saying that climate is changing. Different parts of the world are seeing different effects. Sometimes it means more floods; some places become colder. There are also different parts of the world that are going through drought. This leads us to believe that we should consider change as a whole, not just the possibility of a global warming,’- the meteorologist described the whole picture.

At the same time, the average temperature in northern Europe is becoming higher; this also applies to Latvia, where a rapid increase of air temperature in the last 20 years is noted. An especial temperature increase is noted during winters – the period with a constant layer of snow is gradually becoming shorter, and the general precipitation slightly changes as well. The summer sun actively warms the surface of the ground, which creates enough energy in an environment of increased humidity to create cumuli that, in turn, creates conditions for whirlwinds.

‘Prognoses for the nearest years in the region with Italy, Greece and other countries should be considered in this context – I will not say that this part of Europe will become lifeless, but even now this area has problems with fresh water availability and the climate is becoming dryer and hotter. As a result, the British Isles and the region of the Baltic Sea could become one of the most popular tourist destinations in Europe,’- the meteorologist explains.

The expert projects that these kinds of changes could become a reality in the ‘nearest decade’.

‘I believe that our tourism industry should start preparing. Even now we have a unique natural environment, but we don’t use this potential. Latvians do not advertise themselves – it is within our mentality. Nonetheless, we have significantly more resources than many other countries. And the perspective of the coming natural changes offers our tourism industry a lot of work,’- Viksna explains.

When it becomes dryer and hotter, problems with fresh water availability become more serious, especially within large city areas, like the ones in Italy, Portugal and Spain. Latvia, on the other hand, is in an ideal situation in this regard – good quality drinking water comes from the ground almost everywhere, says the meteorologist.