The world’s happiest countries are close to Lithuania 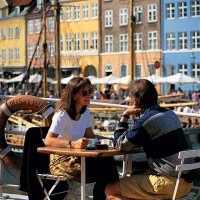 According to OECD (the Organization for Economic Co-operation and Development) latest announcement of annual Better Life Index Australia for the third consecutive year is declared the happiest country among developed world states. In the top 5 of happiest countries are several European countries from Scandinavia, located near the Lithuania - Norway and Sweden. Among the happiest – Canada and Switzerland too.

The OECD investigation evaluated more than 30 world’s states. The study of investigation consists from 11 criteria in order to emphasize versatile welfare.

OECD  Your Better Life Index (BLI), launched in May 2011, is an interactive tool that allows people to compare countries’ performances according to their own preferences in terms of what makes for a better life. First published on 24 May 2011, it includes 11 "dimensions" of well-being: Housing, Income, Jobs, Community, Education, Environment, Governance, Health, Life, Satisfaction, Safety, and Work-Life Balance. Each topic is built using one to three specific indicators. In the case of Work-Life Balance, for example, three separate measures are considered: the number of employees working long hours; the percentage of working mothers; and the time people devote to leisure and personal activities. The BLI seeks to engage citizens in the discussion of what matters most in their lives and what governments should do to improve well-being.

How’s Life?, released by the OECD on 12 October 2011, offers a comprehensive picture of what makes up people’s lives in over 30  countries worldwide.

Why Australia? More than 73 % Australian people aged from 15 to 64 to work in parallel while the average rate among OECD country members is at 66%. The average of life expectancy in the state is near 82 years of age, and this rate is in two years over than OECD average.

Australia‘s economy for more than two decades is on   steady growth, mainly due to the country‘s natural resources demand. Australia has managed to avoid several financial crises and it was the only major developed state avoided the global recession in 2009.

The country‘s economic strength reflected the Australian dollar. But the government sees serious challenges to the economy in the nearest future because the rise of mining sector for some period now is gradually starts to decline, unemployment starts to increase. Another serious challenge - the growing income gap. According to the OECD, 20 % Australia‘s highest-income residents earning six times more than 20 % lowest-income citizens of the country.