Vilnius will start its tennis season with international tennis tournament, the Lexus Cup 2013 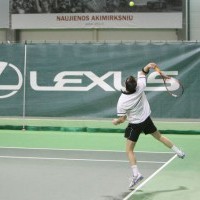 More than 250 participants are going to compete in the qualification rounds and over 100 of them are foreign tennis players, mostly from all over Europe. The tournament will allow many Lithuanian tennis players to get experience in the high levels and to win more ITF ranking points to move up in the world ITF ranking list. During tall four days of the tournament the crowd will get aggressive and interesting tennis.

Lithuania has some senior tennis players that will be able to compete with better players and to gain experience. “I am confident that the sports complex SEB Arena can hold and the seniors tennis championship,” said Lithuanian Tennis Union President Ramūnas Grušas. During the Lexus Cup 2013 tournament , it will be available to see both women’s and men’s singles and doubles competitions of varying age groups from 35 to 75 years. The Women’s Doubles Tournament will take place for the first time.

Registration for the tennis tournament LEXUS CUP 2013 will take place in 2013 and will start on the second day of January. Organizers state that players can be registered only if they bought the international player’s registration number. Information is available in the International Tennis Federation web pages.