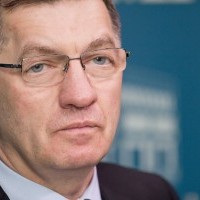 Regardless of the political future of his coalition, Social Democratic leader forges ahead and is already planning his first foreign trips as Lithuania’s most likely prime minister. In his first state visits, Mr. Algirdas Butkevicius is planning to go to Latvia and later to Poland, once he becomes Lithuania’s next prime minister.

Speaking to BNS, Butkevicius declared that “first of all, to Latvia and Poland,” whilst declining to comment on the president’s recent decision not to attend Poland’s independence day celebration this weekend. Expanding on this point, he stated that “it would be incorrect for me to comment on the president’s decision. In the end, it’s the president’s opinion and I respect that,” Butkevicius said whilst making it clear that “relations with Poland need to be improved and warmed up,” declared the prospective prime minister.

He further said that “my position is that we need to improve and warm up our relations with Poland and I believe we could do a lot and reach a lot with such a neighbour as Poland, which is very large and I see it as a strategic partner in implementing many common projects and as a partner in looking for agreement, even at certain meetings of the Council, and we could do a lot of things by supporting each other,” concluded Butkevicius.