Wrestler Kazakevich – incredibly persistent and proud to be Lithuanian 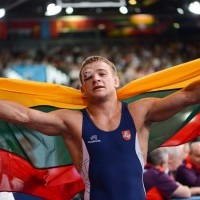 The first Olympic joy came to Lithuania when swimmer Rūta Meilutytė won gold only days into the Games. It took six days before another Olympic medal shone on a Lithuanian chest – also won by a young and little-known athlete, 26-year-old Greco-Roman wrestler Aleksandr Kazakevich, Asta Žukaitė and Aurimas Tamulionis.

In fact, the medal continues a short bronze tradition of Lithuanian Greco-Roman wrestlers. In Beijing, Mindaugas Mizgaitis placed third, while unyielding Kazakevich – Sanya, as he is called by fellow wrestlers – brings bronze from London.

Only closest relatives believed that Kazakevich would keep a promise he had given years ago. He came to his first Greco-Roman wrestling class when he was 12 and instantly announced he was aiming for big results.

“Once Aleksandr started training, he assured us his goal was Olympic medal,” Giedrius Dambrauskas, vice-president of the Lithuanian Wrestling Federation recalled right after the winning fight.

Before the games in London opened, Kazakevich was not even among the athletes who were expected to win medals. Even Lithuanian sports leaders hoped, at best, he would have a place in the quarter-finals and place anywhere between 15th and 10th position.

International bookmakers dismissed the Lithuanian wrestler outright, predicting he would take the last place. “We looked through offers at betting agencies and saw that my odds were the lowest. My coach and I even joked we must turn everything upside down, then it would have been fairer,” Kazakevich grinned.

But his bronze victory was by no means accidental, as proven by a solid list of rivals that the Lithuanian has beaten in the Olympics. The only opponent that Kazakevich yielded to was Russian Roman Vlasov – the Olympic champion.

“Sanya wants to be number one everywhere and always. He never gives up and is incredibly persistent. Even playing football or other games, he wants to win. He is convinced that he is the best. And these qualities guaranteed him success in the Olympic Games,” says one of Lithuania’s most celebrated wrestlers Mindaugas Ežerskis about the fellow athlete.

Kazakevich did it. It took him 14 years of hard and persistent work to land an Olympic medal.

“This medal lends meaning to my entire athletic career. What I’ve achieved shows that my work and effort wasn’t in vain,” said Kazakevich, holding the medal in his hand.

Intense pain and heavily injured eye did not stop him during the final match. The Lithuanian wrestler was hit in the eyebrow during the first fight in London and the swelling made him virtually blind in one eye.

“Today was my day and I did it. It seems that I can see well enough with one eye,” the wrestler joked after his winning match.

Proud to be Lithuanian

Some things, however, did cast a gloom on Kazakevich’s Olympic victory.

“There are always mean-spirited people in Lithuania. Aleksandr heard talks that he was not a Lithuanian, that his origins were not in Lithuania. True, Aleksandr’s parents come from Ukraine and Belarus, but he was born and grew up in Lithuania. Sanya is proud to be Lithuanian,” Ežerskis says.

Those doubting the young wrestler’s national affiliations should have seen him right after the bronze-winning fight, taking the national tri-colour and kissing it in front of millions of spectators in London and around the globe.

During their training sessions, the language of instruction is usually Russian, since, according to Ežerskis, athletes respect their coaches and use their language. “All youths who come to us must learn Russian. But we only use Russian while training, otherwise we always speak Lithuanian among ourselves,” assures world and European vice-champion.

“The wrestling community is like a big family where we trust each other and are prepared to do everything to support one another. Sanya is a good-hearted and reliable person. We’re all very proud of him,” Ežerskis pours praise on Kazakevich.

Before that, Kazakevich made four unsuccessful attempts to qualify for the Olympics. In world championship, he dropped out after the 16th-finals, while the closest he had gotten was in China, when he made it to the semi-finals and only lost the decisive final match.

London was not Kazakevich’s Olympic début. He first competed under the Olympic flame in Beijing 2008.

Four years ago, the 22-year-old competed in 66kg category, but his appearance was cut short. He lost his first fight and placed 15th in the final line-up.