A skyscraper too far 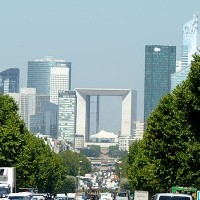 At la Défense, Europe’s biggest purpose-built office complex, workers are putting the finishing touches to the Majunga Tower. The handsome 45-floor building in the business district west of central Paris is due to open around August. There is only one drawback. The building, currently unlet, will add 63,000 square metres to a park where the vacancy rate already tops 12%. Another big building is scheduled to open in 2014.

La Défense epitomises a paradox about Europe’s commercial-property market: a new boom has begun before the previous bust has ended. To generalise broadly across a wide range of property and economies, the mismatch between investors’ enthusiasm and the caution of occupiers has rarely seemed bigger. Investment is pouring back in (see chart), but tenants are not. Outside Britain, Ireland and Germany prime office rents were weak in 2013, says Knight Frank, another consultant.

France has attracted less investment than Britain or Germany, where economic growth looks steadier, and has seen a smaller proportional increase than Ireland or Spain, which promise assets on the cheap. But even in the robust German market there are signs that the bust is not over.