An International Conference on Euro Introduction in Lithuania 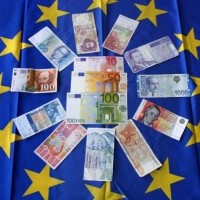 On the 1st of January 2015 Lithuania will become the 19th member state of the Euro zone, further deepening and developing financial and economic integration with the rest countries in Old Continent that belong to general European market of Euro.

In pursuance to commemorate this event as well as to talk over and discuss on enlargement policy and ongoing processes that are aimed at strengthening the functioning of the single European market, the Bank of Lithuania in conjunction with the Ministry of Finance of Lithuania, European Central Bank and the European Commission organized Euro introduction conference “Single Market, Single Currency, Common Future”.

This traditional conference is organizing in each Euro zone member-to-be, was held in Vilnius, in the end of this September , at the building of Lithuanian National Philharmonic, located in Vilnius. The event brought together European and national  level policy specialists, business people, civil society activists and economists to talk over main problems and issues regarding Lithuania’s joining the Euro zone starting the next year.