Germans buy half their wine at Aldi and co 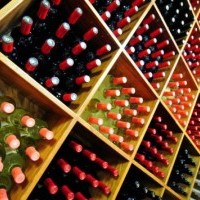 Practically every second bottle of wine bought in Germany comes from one or other of the country's fable discount supermarkets such as Lidl and Aldi.

The domestic German wine market is so dominated by the cheap supermarkets that they cover a stable 48 percent of all wine sales, according to Ernst Büscher from the German Wine Institute (DWI).

Aldi is the biggest German wine seller, said Büscher, adding that the losers from this trend were specialist wine shops and those vintners who sold direct to consumers.

Overall domestic sales dipped a little last year, down by two percent to around 14.5 million hectolitres.

Exports of German wine rose by one percent in 2013 to 1.3 million hectolitre, with a quarter of this shipped to the United States.