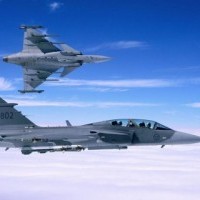 Sweden's top-three defence products account for 42 percent of all exports.

Following news this week of soaring Swedish defence sales, we take a closer look at who is buying what. Both Thailand and South Africa have bought Sweden's prize defence asset, the Jas 39 Gripen fighter jet, with talks underway with Brazil and Switzerland, where the controversial deal has been tied up in a citizens-initiative referendum.

Despite the Swiss delay, the fighter jet comes out on top as one of Sweden's biggest money-spinning defence exports. It also brings in cash when Sweden rents out planes to other countries.

The Saab press team obviously has a poet on board as its website has this to say about Sweden's signature jet: "Gripen is no ordinary fighter. It is your pride. It is your wings." The jet was introduced to the market in 1997, which was only fours year after a prototype crashed over Stockholm. The pilot, thankfully, survived. As did future sales.