Vilnius - a model of tolerance yesterday and today 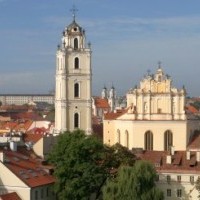 About Vilnius as the historical capital of Lithuania, multicultural city and center, there are a lot of written – from legends to scientific discoveries. This time we would like to look at, for Lithuanians and foreigners living in Lithuania, precious city through the prism of tolerance, how this  phenomenon has been and is important in today's society, how much tolerance influenced the economic development, is it worth to identify the city with this word, which everyone perceive differently ....

Old Vilnius was attraction and junction city of several civilizations, at the same time - ten confessions city. Catholic, Orthodox, Greek Catholic, Orthodox, Lutheran, Calvinist, anti-Trinitarian, Karaites, Muslim and Jewish town ... Differing in ethnicity and professed religion, Lithuanians, Poles, Russians, Belarusians, Ukrainians, Germans, Karaites, Tartars, Jews left their mark in the skyline of the city. In today’s Old town, churches’ towers sprout in massive gilded Gothic and Baroque churches’ domes background, and in Žvėryno suburb, for passerby, pleasant discovery, becomes drenched in the morning, built in Moorish style, Karaim kenesa. But Vilnius is not only the mosaic of civilizations, but and their creative combination, emerged over the years. Numerous confessions left trace shows the culture of religious tolerance dominance in the city and state, religious tolerance, which had painful ordeal of epochs. Thanks to religious tolerance in Vilnius flourished crafts and trade, was settling various guilds of professions.

Are today's tolerance challenges (not talking only about religion) is still relevant in today's society? Probably yes, because from the level of public tolerance attitude to the other ethnic groups of people, their values ​​and commitments depends public goodwill, business success, attracting investment, and foreign attitudes towards us.

Lithuania during the 23 years of independence achieved a lot, we are becoming country with an attractive investment environment. Lithuania have chosen, live in it and develop their business a lot of European Union countries’ citizens, as well as citizens from India, Pakistan, Turkey and African countries. Mini communities of immigrants are already formed, fostering not only business, but also the culture and customs. Multiculturalism and ethnic diversity in Vilnius today is similar to other Central and Eastern European countries capitals.