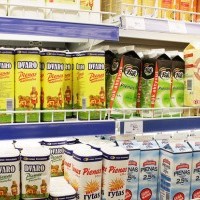 Russia’s consumer protection watchdog Rospotrebnadzor at year-end lifted the ban on the importing of products from Lithuanian milk processing company Pieno Zvaigzdes, reports ELTA. The information was announced on the official Web site of the Russian Agency Rospotrebnadzor.

Meanwhile, Pieno Zvaigzdes said in a statement that it is going to restore exports to Russia as soon as possible and hopes that the Russian market will also open to other Lithuanian dairy companies in the nearest future.