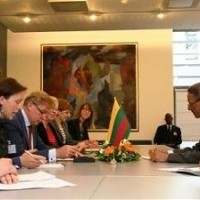 On June 27 in Vilnius, Minister of Foreign Affairs of Lithuania Audronius Ažubalis held a meeting with Minister of Foreign Affairs and Cooperation of Mauritania Hamadi Ould Baba Ould Hamadi, during which he stressed Lithuania’s wish to strengthen bilateral and multilateral cooperation with Mauritania, and to further economic relations. They also agreed to expand legal framework for bilateral cooperation.

Ažubalis noted that when celebrating the 20th anniversary of diplomatic relations, Lithuania and Mauritania should seize an opportunity to promote business relations and mutual investment.
“Cooperation in the field of economy and trade is our priority. Today Lithuania and Mauritania have very low trading volumes, so we are interested in advancing cooperation. We have to promote mutual investment, because Lithuania offers great investment opportunities. I also would like to invite Mauritanian businesses to establish contacts with Lithuanian companies in various sectors, such as financial and business services, transport and logistics, chemical and petrochemical industry, and real estate,” Lithuanian Foreign Minister said.

According to him, the Lithuanian business is looking for new markets and is becoming increasingly interested in business opportunities in the African continent. Ažubalis gave an example of Vičiūnai Company Group, which has plans to invest in Mauritania.

Participants of the meeting stressed that it was important to expand the legal framework for bilateral cooperation. They agreed to draft and sign a bilateral investment promotion and protection agreement, also to sign a cooperation agreement between the Ministries of Foreign Affairs.

Lithuanian Foreign Minister also stressed the importance of cultural cooperation for the advancement of bilateral relations and said that a better understanding and cultural awareness between the people facilitated the intensification of cultural and other exchanges between the societies. Ažubalis invited Mauritania to participate in the Annual Cultural Festival “The African Days” („Afrikos dienos“) next year and to acquaint Lithuanian people with African culture and art.

The conversation focused on issues related to cooperation in multilateral forums. Ažubalis emphasized successful cooperation between Lithuania and Mauritania within the United Nations and other international organisations.

Participants of the meeting were also informed about Lithuania’s preparation for the Presidency of the EU Council in 2013 and discussed developments in the African continent.

Hamadi Ould Baba Ould Hamadi is on a visit to Vilnius on June 26-28. During his visit, he also held meetings with Lithuanian Minister of Agriculture Kazys Starkevičius, Chairman of the Seimas Delegation to the Parliamentary Assembly of the Francophonic Countries Vidmantas Žiemelis. He also visited the Centre of Oriental Studies at Vilnius University.