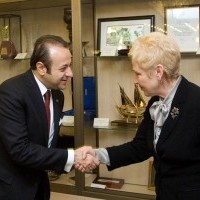 On 2 July in Vilnius, Lithuanian Vice-Minister of Foreign Affairs Egidijus Meilūnas met with the new Ambassador of Turkey to Lithuania Akın Algan to discuss the development of bilateral relations and prospects of economic cooperation.

Meilūnas stressed that Lithuania supported Turkey’s integration into the European Union and was prepared to continue to share its experience accumulated on the path to the EU.

The Vice-Minister and the Ambassador discussed the potential for economic cooperation between the countries. Meilūnas invited Turkey to more actively participate in transport projects and make use of the logistics potential that Lithuania offered as a modern and comfortable transit country.

The Ambassador informed the Vice-Minister about the plans of the company Turkish Airlines to launch flights on the Istanbul-Vilnius-Riga route already this winter season. This is expected to prompt Lithuanian and Turkish entrepreneurs to establish more direct contacts and should significantly contribute to the development of economic ties between the countries.

Algan is a career diplomat who has served as the Turkish Ambassador to Tunisia. He entered the service in 1976.