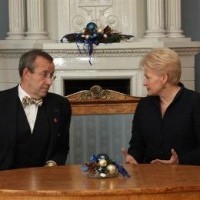 On June 22 in Vilnius, Minister of Foreign Affairs of Lithuania Audronius Ažubalis and Chairman of the NATO Military Committee Knud Bartels discussed the progress of the Lithuanian Energy Security Centre in achieving the status of a NATO's Centre of Excellence.

Ažubalis said that NATO member states were to sign the letter of intent on participation in the centre’s activities on July 10 in Norfolk, the United States. The Minister suggested that the NATO Military Committee include the issue of the accreditation of the Energy Security Centre in their agenda this autumn.
Bartels assured that he saw no reasons why the centre should not be accredited to NATO.

The Energy Security Centre was set up at the Ministry of Foreign Affairs of Lithuania in the beginning of 2011. It seeks to make use of Lithuania’s experience and promote cooperation of experts from other countries in the field of energy security. The centre will contribute to NATO's transformation, development of capacities to analyse and reduce threats related to energy security and energy security infrastructure, drafting of methodology of threat assessment and early warning, and will provide recommendations on NATO’s policy in the field of energy.

Participants of the meeting also discussed closer cooperation with partners and the transfer of military weapons and technology to third countries.

The Chairman of the NATO Military Committee thanked Lithuania for the contribution to the NATO activities and expressed hope that the agreement between the political parties to increase defence spending would be successfully implemented.

The Military Committee is the senior military authority in NATO. Therefore, it is the primary source of military advice to NATO’s civilian decision-making bodies and represents an essential link between the political decision-making process and the military structure of NATO. In the beginning of 2012, Bartels was elected Chairman of the Military Committee for a three-year term.