Ilves: the security of e-services does not suggest secluding oneself 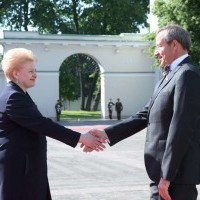 Yesterday, Estonia’s president Toomas Hendrik Ilves spoke at the worldwide ICT forum ICT2013 in Vilnius, which concentrated on development, creativity and discovery. In the course of the consideration on modernisation and construction bridges, the Estonian Head of State stressed the importance of believe when developing e-services and promoting innovation, particularly in lightweight of latest anxieties over privacy, informed BC presidential press service.

"Now the tendency appears to be more towards dismantling bridges and building outposts, not the other way around," the President asserted and warned that decrease of believe and removing would eventually make us give up everything positive that we have accomplished with IT so far.

"What we have accomplished in Estonia so far is likely thanks to a good cloud-based architecture and safe e-identity," leader Ilves said. The security of e-services comprises three components: privacy, integrity and manageability. Due to latest scandals, people are most concerned about privacy, but in truth, corrupting the integrity of the data or altering them is the greatest risk, because when false facts and figures is added to schemes, it could impairment the infrastructure or even put inhabits in hazard.

"We should keep in brain that the aim of expertise is to advance the value of life," leader Ilves said. Therefore, both politicians as well as businessmen must appreciate that you can't deal with the risks of the networking 21st years world by utilising legislation from the 19th century.

The Estonian Head of State furthermore participated in the ICT2013-related seminar at the Lithuanian Academy of Sciences, where the development of the widespread market of the European Union and cloud computing was considered. At the seminar, he stated that believe is furthermore the key to evolving the European commom market, including the digital market of services.

"We cannot answer to the current crisis of believe by withdrawing into ourselves, and drawing borders," the President alerted. rather than, clear international legislation, protected facts and figures processing architecture and smart mechanical solutions are needed, so that we could move in the direction of widespread and transnationally matching and protected e-services all through Europe.