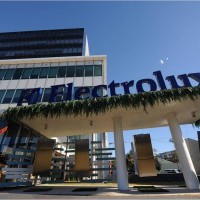 The first project is a spoon allowing ‘eaters’, using the buttons, to control the dosage of ingredients added to their food. In turn, Drungilas project is an information display mounted on the refrigerator with the help of sensors gathering information from a selection of products in the fridge and warning when they start to deteriorate.

The ‘Electrolux’ competition finalists will be announced in September; they will go the finals in Milan at the end of October to present their works live.

This year, 27 projects were submitted to the ‘Electrolux’ competition by Lithuanians. Highest achievement was in 2009, when dishwasher “Bifoliate” by VDA student Toma Brundzaitė was ranked among the top eight competition works.

This year’s contest theme is ‘Design experience’, so most of the semi-final concepts are intended to be used in the kitchen, some of them use sound, produce and mix a variety of scents, project images or suggest what can be made from existing ingredients.