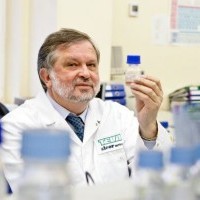 Vladas Algirdas Bumelis. These are the only words on a business card extended by the 2012 Lithuanian business leader of the year. No offices, no titles. Bumelis, who has just finished a job in one influential post, is already talking of a new challenge – building a generic drug factory in Lithuania.

“All positions are temporary,” says the known biotechnologist, founder of genetic engineering pharmacy in Lithuania, and successful businessman. “If I put together all the posts I hold today, it would take an entire sheet of paper. So I decided to just write my name – that is enough.”

And yet, it seems appropriate to mention that Bumelis is a member and holds a seat in the Praesidium of the Lithuanian Science Academy, professor at Vilnius Gediminas Technology University, Israeli honorary consul to Lithuania, president of Lithuanian-Israeli Chamber of Commerce, and president of Santaros slėnis (Santara Valley), an association that implements development programme at research and business centre Santara.

Until recently, Bumelis, who will soon turn 63, had one more title in the list – he headed a leading Lithuanian biopharmacy company, Sicor Biotech, which is owned by Teva, international generic drug producer. He quit as CEO in April.

Time for retirement? “Retiree – what kind of a word is that? As I see it, a person must always move forward, look for interesting things to do, develop his or her personality. From birth to departure,” says Bumelis, who suddenly seems irritated by his aching leg. He hurt it when he was jumping off a treadmill.

“I run two kilometres each day. When I’m done, I don’t have the patience to wait until the treadmill stops – I simply jump off. The last time wasn’t very graceful,” Bumelis admits and invites me on a tour around the Santara Valley and a new biotechnology research and experimental development centre Biotechpharma.

Starting from the environment

The Biotechpharma building is probably the only completed construction in the Santara Valley. It is surrounded by construction sites for future Valley objects.

Despite the still rather grim neighbourhood, the company – which does R&D contracts in biotech pharmacy – takes good care of its surroundings, planting grass and trees.

A company’s image begins with its premises, Bumelis says, including the parking lot, the building’s façade, and the lobby.

“Of course, one could say – what’s the use of planting those decorative bushes or keeping a garden, it will do as it is. However, when a person enters a nice environment, he is in a completely different mood for work,” the Santara Valley president insists.

Dedication to hard work is also exhibited in the Biotechpharma lobby, epitomized by a stylized sculpture of a beehive.

“Bees are hard-working creatures and they also work collectively. The result of their work is honey. Sweet and also healthy,” says Bumelis, adding that his father was a bee-keeper, even though he never attempted to make a living out of the hobby. Two bees are on the coat of arms of the Bumelis family.

Equipment worth a Porsche

“Take a picture of me with this piece of equipment. It looks like an ordinary box, but it costs the same as the latest Porsche,” Bumelis is prone to imaginative comparisons.

He opens the door to a several-square-metre room and explains: it is a 2.5-million-dollar lab.

“You tell me – why do young scientists have to go to irelands and englands if everything we need is right here? Where can they find a better place? They pay more there, you’ll say. But everything is relative – taking all areas into account, there is no cheaper living than in Lithuania,” the professor is certain.

- And yet, I’m wondering, why you decided to leave after sixteen years as the leader of Sicor Biotech? – 15min asked professor Bumelis.

- A number of circumstances came together. First, I had contractual agreements with Teva and they expired. Second, Teva is very strict about certain age restrictions. When you’re of a certain age, they come and say: “Great, it’s time to pass the post to others, go and enjoy life!” So I transferred my responsibilities to a student of mine, while I myself continue working with Teva as their development and science consultant.

The third important factor is that I’m very interested in new things. Sicor Biotech makes products that I’ve created, installed technology for, and released into the market. Now, the product is being produced 24/7. I convinced Teva to invest more money and expand production. The product is now being sold in European and world markets. Everything’s accomplished, there’s no more room for creativity, and I like breaking ice.

- You have hinted at another ambitious goal – setting up a new pharmaceutical company.

- I’ve been silently reflecting on the need to build a drug factory in Lithuania for the last three or four years. And now I finally raised the issue aloud.

As we stand today, only 1 percent of drugs consumed in Lithuania are actually produced here, while, say, in Denmark or the Netherlands – about 15-20 percent. So basically all the money we spend on medication leaves the country. The big pharmaceutical companies would say they leave piles of money in Lithuania, but that’s only partly true. The money goes to marketing and not creating new jobs or contributing to the country’s GDP. So I think that Lithuanian private business, with some assistance from the state, could start developing a decent pharmaceutical industry.

By producing 10-12 percent of medication domestically, we could significantly knock down the prices we’re now offered by the foreign partners. Bearing in mind that our salaries have not yet reached the Western European level – and probably will not for at least another ten years – and using support from structural funds and the state, we could very well produce drugs at a very decent cost.

According to my calculations, the state could save 0.3-0.5 billion litas a year, since most of these drugs are subsidized. Besides, by offering the lowest price, we would provide the opportunity for the state to purchase them in the domestic market.

- What drugs are we talking about?

- The factory would not be developing new medications or technologies. It would simply mass-produce generic drugs. Generic drugs are copies of existing varieties that you can sell under your own brand. You don’t need any patent to produce them. It would be something similar to a packaging plant: we would purchase active ingredients, we put them in a form, package, put our label, and then sell it to Lithuanian and foreign consumers.

Generic drugs have been known since Adam and Eve. To be more precise, the range of drugs we might produce is very broad, from Citramon, anti-infection medication, and painkillers to antibiotics and cancer drugs.

- Why do you think Druskininkai is a perfect place for that kind of activity?

- I do not agree that the entire Lithuania should be concentrated in one village called Vilnius. I, for one, established a medical centre, Northway, in a town called Kretinga. Before that, the site was a slump. Once I cleaned up the area, other people living around it started cleaning their yards too: someone fixed his collapsing fence, another built a gate, someone else swept the street, another painted his house. The general scenery improved instantly.

A drug factory is a clean plant, there is no black smoke erupting from the chimney. So a pharmaceutical plant could be built anywhere: in Druskininkai, Kretinga, Darbėnai. However, I’m leaning towards Druskininkai because the town has a consistent service industry strategy.

In my recent meeting with Prime Minister Kubilius, I said that the biggest problem in Lithuania is our strategic indiscipline. We draft hundreds and hundreds of strategies but we lack discipline to follow them through. And so every new strategy is just a routine hoot, an empty debate. Druskininkai has a goal and consistently works towards it.

- If your ideas received support of potential partners, when would the plant start working and how much investment would it require?

- If we started work seriously and put together a business plan, the factory could launch in, say, 2015.

- You sound very confident – are you 100 percent certain about the benefit this idea would bring to the state and the people?

- As I’ve said, a business must first appear in your head, grow as an idea for several years. When everything comes into places, then we can start. Nothing can be achieved spontaneously. I haven’t seen a single successful business that wasn’t first developed in someone’s brain.

One more thing – if a bank refuses to give credit to launch a business, it is right. It means the idea is crap. When a good business idea comes, all banks are more than eager to give money. Biotechpharma, too, took out huge loans, but the bank believes in it, since it has a well-organized business strategy.

I’ve always said and I’ll continue saying that a future for Lithuania lies in high tech, brain products. That’s what we should invest in. We’ve enough cheesemakers and butchers. And we certainly do not need to pave every single road in the country. I can drive a few kilometres on a gravelled road to my house in Pabradė – no harm in that.

I suggest we invest in one resource, knowledge. We’re an extremely brainy nation, we have great genes, we just need to work harder.

- Are you saying we are a lazy nation?

- Not lazy – a little sluggish. If you want to live well, you need to work more than 8 to 5 with three smokes and four coffee breaks.

When someone tells me we need to toil, my reply is that only horses toil. You gear up a horse and it ploughs. We are not horses. We mustn’t toil, we must work efficiently. And for that we need to set clear goals and assess if we have enough financial and, more importantly, human resources to achieve them.

I’ve a good saying: In business, just like in agriculture, you must do everything in time, not when you have time.

And one more thing, for youngsters: you cannot live like Rockefeller when you’re 25. You must put in some work first. There’s no such thing as success, only diligent and long work. 99 percent of work and 1 percent talent.

- But you yourself could afford to have some rest.

- I had an idea that golf should be my work and science and investment my hobby. I’d love if it were so. One thing I’m afraid of, though, is that hobby might turn into work. All my life I wanted to be a leader, to be the best at whatever I do. I’m practising in golf fields, perfecting my moves. So they can say it is the best move in the Centre of Europe golf club.