For centuries Lithuania and Poland have fought together for freedom 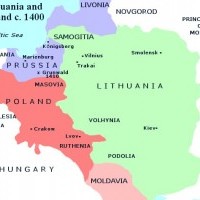 At the Air Base in Zokniai on July 27, Lithuanian Minister of Foreign Affairs Audronius Ažubalis met with Polish Air Force personnel who are conducting the NATO Air Policing Mission in the Baltic States. Ažubalis thanked them for their service and stressed the importance of the Lithuania-Poland security cooperation in responding to common challenges.

“For centuries Lithuanian Vytis and the White Polish Eagle were used together as common emblem to decorate one and the same shield. I do believe it is very important for us all to hold this shield tight in our hands as we meet the new threats of the 21st century,” the Minister said.

According to him, the service of the Polish military contingent in Lithuania, an intense and successful bilateral military cooperation in the whole region confirm one old and simple truth: it is only when Lithuania and Poland stand side-by-side that the freedom of our nations is secure.

Ažubalis presented to the Polish military personnel a set of postage stamps issued by Lithuania Post with a motif of a painting by Jan Matejko, which portrays the Battle of Grunwald.

Polish Air Force is participating in the NATO Air Policing Mission in the Baltic States already for the fourth time. The Polish military personnel patrol the Lithuanian, Latvian and Estonian skies with four MiG-29 aircrafts. Representatives of the Czech Republic are to take over on September 1.

The NATO Air Policing Mission has been conducted in the Baltic States since 2004 with an aim to protect the Baltic air space. NATO countries conduct the mission on a rotational basis, every four months they send their air force contingent to Zokniai Air Base thus ensuring a permanent patrol of the skies. Already 14 countries participated in the mission, which was planned until 2014. At the NATO Summit of Heads of State and Government this May in Chicago, the air policing mission in the Baltic countries was called an example of smart defence and extended for an indefinite period.

In Zokniai, the Minister also took interest in the functions of the Air Base of the Lithuanian Air Force, its tasks and support to the NATO air force contingents in conducting the rapid reaction air policing mission.

On the same day in Šiauliai, Ažubalis met with Mayor Justinas Sartauskas. At the Šiauliai Chamber of Commerce, Industry and Crafts, the Minister met with local entrepreneurs to discuss their concerns. At the Šiauliai City Municipality, he participated in a joint discussion with civil society representatives and the media.