The man who showed why firms exist 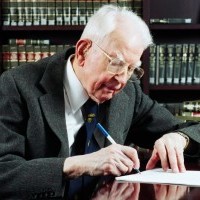 Ronald Coase lived an extraordinarily long and productive life (see Free exchange). In awarding him the Nobel prize for economics in 1991 the Swedish Academy singled out two papers for particular praise, one published in 1937 and based on a lecture which he gave in 1932 when he was only 21 years old, and one published in 1961. He published his last book, “How China Became Capitalist”, last year at the age of 101. Not bad for a London boy whose parents both left school at 12 and who was consigned to a special-needs school because he wore leg braces (it was only the timely intervention of a phrenologist who detected “considerable mental vigour” in the bumps on his head that redirected him to grammar school and thence to the London School of Economics).

But it is his work on the firm that marked him out for greatness. Most economists had been content to treat firms as black boxes. Mr Coase wondered what the black boxes were doing there in the first place. He used a scholarship that he won as an undergraduate to visit leading American firms such as Ford and General Motors. He summed up his thinking in his 1937 essay, “The Nature of the Firm”, which at first attracted no attention whatsoever, but continues to be cited to this day.

Mr Coase argued that firms make economic sense because they can reduce or eliminate the “transaction cost” of going to the market by doing things in-house. It is easier to co-ordinate decisions. At the time, when communications were poor and economies of scale could be vast, this justified keeping a lot of things inside a big firm, so carmakers often owned engine-makers and other suppliers.

Mr Coase’s theory of the firm would suggest that firms ought to be in retreat at the moment, because technology is lowering transaction costs: why go to the bother of organising things under one roof when the internet lowers the cost of going to the market? And it is true that companies are rising and falling at a faster rate than ever. Back in 1958, companies in the S&P 500 had typically stayed in the index for 61 years; today the average is just 18 years. Nokia produced a quarter of the world’s handsets in 2000. This week it decided to focus on making telecoms equipment and sold its handset business to Microsoft, which is also a shadow of its former self (see article).

But far from bringing an end to big companies, the internet is producing Goliaths of its own. Google accounts for about 40% of the world’s internet traffic, and Amazon is experimenting with vertical integration by investing in content as well as distribution. That could be because transaction costs, although lower than they used to be, are still a significant part of doing business: it is still easier to work on complex ideas, designs, deals and projects face to face.

Or it could be because firms do other jobs that Mr Coase did not acknowledge: they can develop intellectual resources, for instance, from company-specific knowledge to specialised skills that cannot be developed by individuals acting on their own or working through the market. That even applies to the murky arts of journalism. For instance, 170 years ago this week, a newspaper appeared, often written largely by one man, James Wilson. To the relief of its now slightly larger but obviously no less industrious workforce, The Economist survives.

Whatever happens to this particular transaction-costs-reduction device, Mr Coase’s work should remain close to the heart of anyone who cares about capitalism. He taught economists that they should not just pore over numbers but look inside the organisations that produce wealth. And he set a test that every boss still has to answer: what does their firm do that cannot be done more efficiently elsewhere?